IPEM has become the headquarters for more than 150,000 medical physicists and biomedical engineers across the world working on the physical and engineering science of medicine.

The International Union for Physical and Engineering Sciences in Medicine (IUPESM) has been incorporated as a company in the UK, with its registered office as Fairmount House in York, the home of IPEM.

IUPESM was created in 1980 as a union of the International Organization for Medical Physics (IOMP) and the International Federation of Medical and Biological Engineering (IFMBE), with the aim of gaining visibility and global recognition of the professions of medical physicists and biomedical engineers.

IOMP has had Fairmount House as its registered office as a company in the UK since 2018. 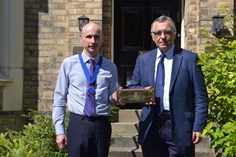 Dr Tabakov said: ‘This is a milestone for IUPESM. It took over three years of hard work but finally this historic step for IUPESM has been completed.’

Dr Farley added: ‘I’m delighted IPEM is the new registered office for IUPESM as it builds on our strong relationships stretching back many years.’