A ‘DISAPPOINTING’ response to the funding of Clinical Scientist training places in Scotland has been received by IPEM.

Last month, in a letter to Karen Reid, the Chief Executive Officer of NHS Education for Scotland (NES), Dr Robert Farley, IPEM’s President, said the lack of funding for Clinical Scientist training places would have a negative impact on patient safety.

In his letter, Dr Farley said he understood NES was proposing funding equating to less than a single training post in medical physics and clinical engineering in 2023, despite the Scottish Government's Chief Healthcare Science Officer’s public acknowledgement of the importance of training.

He added Scotland currently has a 10 per cent Clinical Scientist vacancy rate across the medical physics specialisms. This equates to seven vacancies in radiotherapy, three in nuclear medicine, four in diagnostic radiology and radiation protection, posts which are critical to supporting diagnostics and cancer treatments.

NES has now responded to the letter, saying while it is fully supportive of the training of the healthcare science workforce in Scotland and recognises the important contribution they make to the delivery of safe patient care, there would be no additional funding available for Clinical Scientist training places. 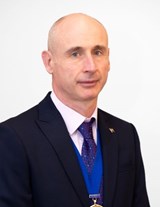 In response to the letter, Dr Farley said: ‘Whist I appreciate the financial pressures NHS Education for Scotland is under, as many organisations are, it is very disappointing that there will be no increase in the funding of Clinical Scientist training places, given their critical role in supporting so many clinical services.

‘I stated in my letter to NES that the long-term effect of this lack of funding would be to worsen an already acute workforce shortage, leading to more and longer delays in treatment, greater risks to patient safety and potentially poorer patient outcomes, and I stand by that.’

Dr Jemimah Eve, IPEM’s Head of Workforce Intelligence and Training, added: ‘The workforce shortage can only be redressed with sustained investment in sufficient training places every year, not just once.  Falling so far short one year will set us back.’