AN IPEM member has joined an illustrious list of science communicators who have won a prestigious award.

Dr Sharon Ann Holgate has been awarded the 2022 Institute of Physics William Thomson, Lord Kelvin Medal and Prize for her work in communicating science to a wide variety of audiences and for positive representations of scientists from non-traditional backgrounds. 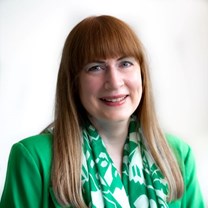 Dr Holgate said: ‘This award means a great deal to me, not least as due to my physical disability I have faced many obstacles to progressing my career. I am hoping my award win can encourage other people, no matter what their background is or what challenges they face, to pursue a career in their chosen sector of science.’

Dr Robert Farley, IPEM’s President, said: ‘I am absolutely delighted that Sharon has become the latest in a long line of celebrated science communicators to win this prestigious award.

‘She has been an IPEM member for many years and has made valuable contributions to our charitable objectives with her brochure series for the Institute in particular and to healthcare science in general.’

Dr Holgate is a science writer and broadcaster, spanning all areas of public engagement but particularly effective in engaging children. Disabled herself, she has shown how people from non-traditional backgrounds contribute to physics and science in general, using her ability to make difficult ideas accessible.

She has worked inside academia via science communication training (Rhodes University, Imperial College London and King’s College London) and is one of the few non-academics to write an undergraduate textbook, Understanding Solid State Physics, using her expertise to create a book that is used around the world.

She has co-written a children’s book The Way Science Works (2002), a highly illustrated introduction to physics and chemistry for 9–14 year-olds, translated into several languages and shortlisted for an Aventis Prize. From 2017–19, she wrote a series of books, Outside the Research Lab, describing the physics of art and design, transport, and sport, respectively, and is a contributor to two popular science books, 30-Second Energy and 30-Second Quantum Theory. A new book for adults has been published in 2022, Nuclear Fusion: The Race to Build a Mini-Sun on Earth.

Dr Holgate has broadcast several radio programmes, including a documentary about Bose called The Indian Particle Man, highly praised and shortlisted for an Association of British Science Writers award. She devised and presented a BBC Radio 4 ‘science pantomime’, Jack and the Genetically Modified Beanstalk, and a BBC World Service mini-series, E = MC Shaz, investigating the claims some pop music lyrics make about science. She has appeared as a contestant on a ‘Boffins Special’ of The Weakest Link, on Chris Evans’ BBC Radio 2 programme and on The Curious Cases of Rutherford & Fry on BBC Radio 4.

She has appeared in countless other broadcasts and written numerous articles. Her regular articles for Science Careers (2011–18) often featured scientists who were disabled or from disadvantaged groups.

Between 2005 and 2009 Dr Holgate wrote a series of Spotlight brochures for IPEM, highlighting how new and emerging physics and engineering research is used to benefit patients. The topics she covered in the series included Positron Emission Tomography/Computerised Tomography Imaging, Optical Techniques in Medical Imaging, Electronic Technology for Independent Living, Proton and Ion Therapy, and new applications in Magnetic Resonance Imaging.

In addition, she also wrote Moving on Up for graduates for IPEM, promoting careers in clinical science and engineering. In 2010, Dr Holgate also wrote Improving Treatments, Saving Lives: The Importance of Physics, Engineering and Technology in UK Healthcare for the Institute.

Dr Holgate has presented several live science shows including two Science and Magic shows for the Jewish Museum, one of which required an extra show to be scheduled. Of particular resonance was a show for patients at Great Ormond Street Hospital, where she underwent several operations while growing up.